Miguel Cotto is a fighter. Miguel Cotto is from Puerto Rico. Miguel Cotto’s wife is allergic to bras. These are about the only incontrovertible statements one can make about Cotto. Maybe more than any fighter in recent memory, Cotto’s legacy is perpetual fodder for debate — the kind of heated debates that generally conclude with phrases like “I’m sleeping on the couch tonight” or “You’re fired” or “Please stand and face the jury.” Do you value your sanity? You do? Then I would strongly advise against bringing up Miguel Cotto’s Hall of Fame credentials around another boxing fan. Do you enjoy teetering on the brink of a psychological meltdown brought on by conspiracy theories and racial slurs? You do? Try mentioning Cotto’s first fight with Antonio Margarito on your social media feed.

To some, Cotto was a legend who fought the best fighters of his generation. To others, he was a diva who cherry picked his opponents. To some, Cotto was a silent assassin who rose in weight seeking out the toughest challenges. To others, he made up ridiculous catch weights to accommodate his preferred mass at that particular moment and forced financially dependent fighters to comply. To some, he was the walking embodiment of Boricua machismo. To others, he was a prima donna in pink Crocs whose friendship with Bryan Perez may have included the description “with benefits.” With so many varying opinions on Cotto’s career and legacy there are countless ways one could honor the Puerto Rican legend. This is boxing though so I’m gonna go with the dumbest one possible and take a deep dive into the horror of his tattoos. Buckle up.

About the only thing every boxing fan can seem to agree upon is that Miguel Cotto’s tattoos are insane. They’re the kind of thing a schizophrenic clown’s brain shows him as he’s overdosing on shark tranquilizers. They’re what a kidnapped child would draw if you locked him in a room with a bottle of Boone’s Farm and a paint roller. People use the term “prison tattoos” as a pejorative but Cotto’s tattoos are riding the bench in the minors waiting to be called up to the prison league. I guess what I’m saying is they’re awful and they scare the shit out of me. So let’s get to the bottom of this. Let’s go through each stage of his defiled torso and see what was added, where it was added and for the love of god, WHY it was added. This is gonna suck. This stage takes us from Cotto’s pro debut against Jason Doucet on Feb. 23, 2001 through his welterweight title defense against Alfonso Gomez on April 12, 2008. This was a peaceful time in his skin’s life. A simpler time. A time when malfunctioning tattoo guns full of dollar store ink weren’t allowed anywhere near it. It was the calm before the storm for our eyeballs as well. It was the last time we’d watch a Miguel Cotto fight without seeing what looked like a Rorschach test someone dropped in the bathtub. You know that Don Henley song “The End of the Innocence?” It was written about this period. Don’t fact check that timeline. Ok, now we’re cooking. There’s a song by the band The Bronx which contains the lyric “Give me an empty canvas/So I can throw it away.” This appears to be Cotto’s mission statement during these 16 months. It’s really no secret what set this whole project in motion. The emotional fallout from the first Antonio Margarito fight on July 26, 2008 fast-forwarded Cotto’s midlife crisis by about 20 years. Having your soul stolen will do that to you. Smearing your upper body with what looks like a melted hot wheels track someone left in the sun, however, is a seemingly odd way to commemorate this time in one’s life. We can also see that he’s added a list of names to his left bicep. These are presumably the names of his children but having sampled Puerto Rican cuisine before I feel confident that a list of human names could also be a recipe of some kind. There’s some type of symbols on the inside of both of his wrists but those could just be club stamps from the night before. I can’t pretend to know his life. With the ass kicking he took the next night from Manny Pacquiao though, it would be surprising to me if he wasn’t out all night wolfing down disco biscuits at Dracula’s Sex Mansion, which is a dance club I just made up. And like the wicked case of squat rot he likely contracted that night, his tattoos were only going to get worse. 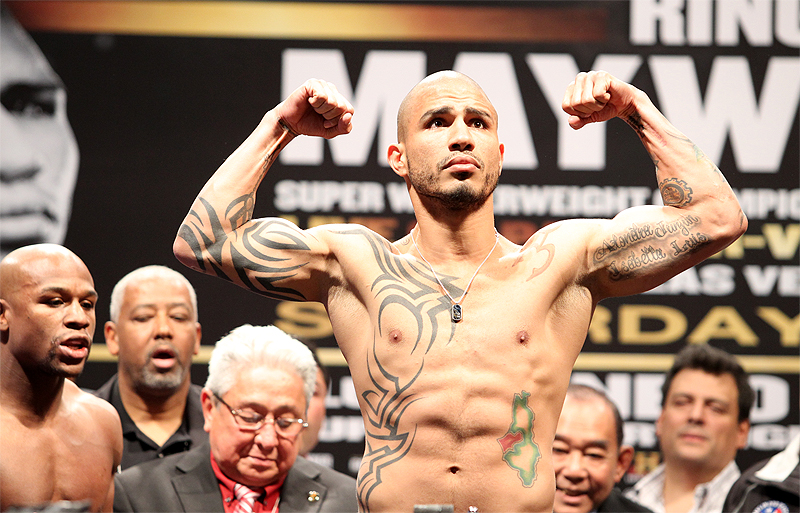 Not a lot of action on the tattoo front during this period. Like a reluctant serial killer, Cotto was able to effectively ward off the demons in his brain during these 23 months and not commit any bodily harm. This inner peace can most likely be attributed to Cotto exacting his revenge upon Antonio Margarito on Dec. 3, 2012. This is like finally killing the werewolf that ate your parents though. The solace only temporarily masks the scars and when you see yourself in the mirror it still looks like you let a blind Navy SEAL test out the accuracy of his new paintball gun on your shirtless torso. The only notable additions to the optical illusion his upper body is fast becoming here are a red Om symbol on his left shoulder, some type of circular gear thing on his inner left forearm and a BRIGHT FUCKING GREEN outline of what I presume to be some shithole in Puerto Rico on his abdomen. On their own, none of these are particularly alarming. As parts of a cohesive project however, the unfocused scatter shot nature of their placement and coloring is truly disturbing. Getting tattooed is like a game of Jenga: One wrong move can bring the entire game to a screeching halt. And you probably shouldn’t do it while on cocaine. 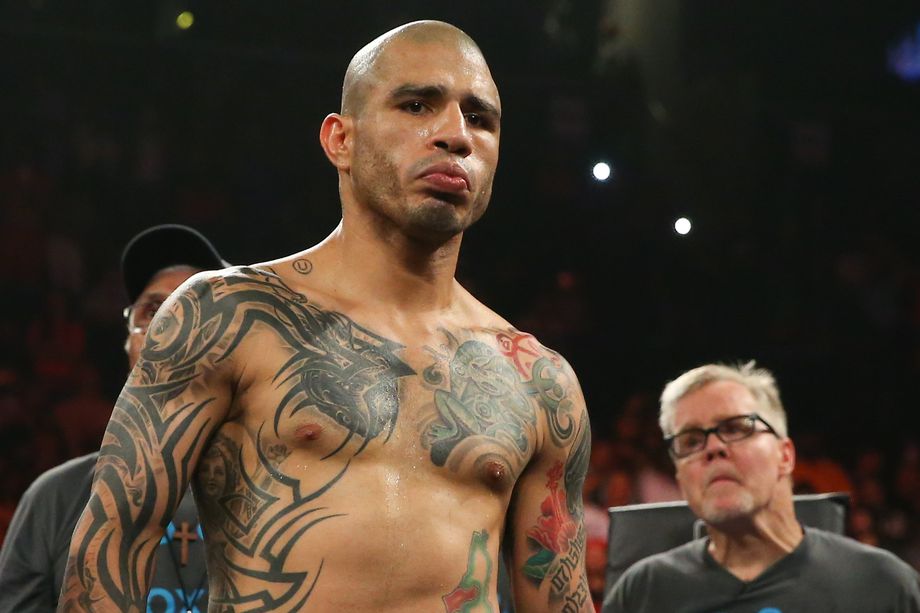 Up until like 2004, the only people who had full tattoo sleeves were carnies, pirates and death row inmates. If you saw someone with a neck tattoo it would be last thing you’d ever see because they were standing over your bed strangling you with an extension cord. Nowadays though, a person covered dick to forehead in tattoos is probably named Keegan and works in accounts payable at a gluten-free bakery. It’s just not a tough look anymore. I mention that only because this was a particularly tumultuous time in the ring for Cotto. A win over Sergio Martinez for the lineal middleweight title was sandwiched on either side by losses to Austin Trout and Canelo Alvarez. This is an emotional rollercoaster that can apparently only be dealt with by letting your tattoo artist eat all of his ink and take a Dumb and Dumber shit all over your exposed skin. Let’s do this lighting round style. In the next 30 seconds I will type all the things I can see that have been added to Cotto’s torso and what I think they are. Aaaaaaand go:

I probably don’t have to mention this but none of this seems healthy. Boxing is a dangerous sport and I can’t imagine a more clear sign of deteriorating mental capabilities than turning yourself into a living Jackson Pollock painting.

Well, this is it: the finished product, I guess. Let’s be honest though, this is a finished product the same way the 9/11 memorial site is the finished product of the World Trade Center construction — just an absolute tragedy that didn’t need to happen and changed our lives forever. He’s filled out both sleeves with frogs and robots and flowers and whatever other shit he could find in his five year old son’s dream journal. Miguel Cotto is the guy who hears one Velvet Underground song then goes out and buys the entire box set and says he’s been a fan since day one. From 2008 to 2015 he went from having ZERO tattoos to having all the tattoos. That’s not even two presidential terms. You generally need to be entering your fourth decade operating the tilt-a-whirl or serving consecutive life sentences to accumulate tattoos at that pace. Cotto ended his career with a unanimous decision loss to Sadam Ali and an overall record of 41-6, which is probably not how he saw things turning out. His torso concluded its career with a methicillin-resistant staph infection, which is definitely not how it saw things turning out but we don’t always get what we want in life, do we? Maybe it can take solace in the fact that it became a permanent cautionary tale to the rest of society about the dangers of impulse buying at the tattoo shop.

When I was little my dad told me that the more tattoos you get, the easier it will be for the cops to identify you. If this principle is true, Miguel Cotto should be in handcuffs before you get done reading this sentence. And after writing this article I feel uniquely qualified to be a character witness for the prosecution at his trial.

Japandroids – Near to the Wild Heart of Life

The Movielife – Cities in Search of a Heart

Life of Agony – A Place Where There’s No Pain

The Menzingers – After the Party