Last Saturday night, from the rain soaked StubHub Center in Carson, Calif., Oscar Valdez did what he wanted to do. I’m not suggesting that he had his way with Scott Quigg in their featherweight bout on ESPN. Far from it. What he did was to assert his will over everything around him, most importantly over himself. And it started way before the fight.

On Friday, Quigg weighed in just shy of three pounds over the featherweight limit. Some people thought the fight would be canceled. There was talk of a weight limit for the next day. Neither of those things happened. The fight went ahead, despite the reservations of many with vested business interests in Oscar Valdez’s career. The non official ring weights for this featherweight bout, as reported by ESPN’s Bernardo Osuna during the telecast were 135.6 pounds for Valdez, and 142.2 for Quigg. The Briton had a seven pound advantage. It didn’t matter.

According to the LA Times’ Lance Pugmire, Valdez shitcanned the second day weigh in, because he was going to fuck Quigg up. He didn’t care that his opponent had a size advantage. He knew that he was the better fighter, and that he would win.

If you listened to ESPN’s gasping, pearl clutching announce crew, none of this should’ve happened. How could anyone put themselves at such a disadvantage? It seemed outright unfair that a promising young talent like Valdez could be allowed to endanger himself in such a way. Analyst Mark Kriegel sermonized on the weight throughout the fight. Each round, he found himself aghast. In the 6th round, he referred to Valdez being “oblivious” to the size disparity. I guarantee you that he was aware. He just didn’t give a fuck. That’s why he’s in the ring, and Mark Kriegel is wearing a headset. 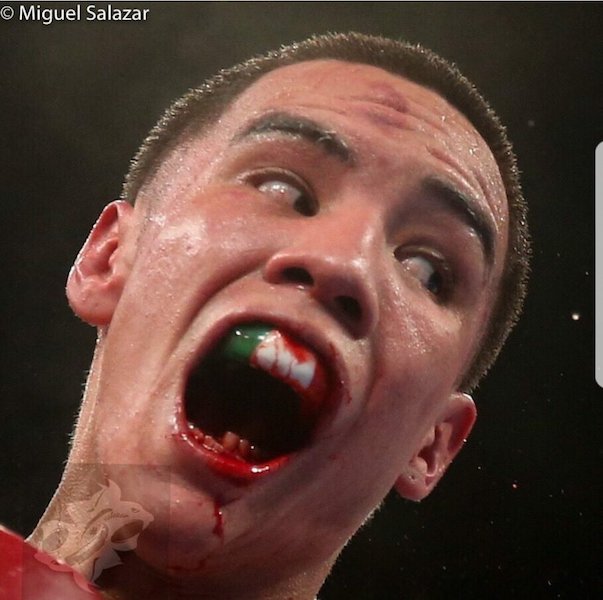 Somewhere around the 5th round, Quigg dislocated Valdez’s jaw. The above picture is what it looks like when half your jaw is not lining up anywhere near the other half. Valdez felt it. If he cared, he didn’t show it. For 12 beastly rounds, Valdez and Quigg did everything they could to convince the other man that he didn’t want to be there; that the reward was not worth the pain being extracted. They fought a battle of attrition, because those are the tools they have available. Neither man is a stylist, and neither a huge puncher. They skillfully punish you into submission.

Valdez won on the scorecards (117-111 two times, and 118-110). They didn’t matter. His point had been made repeatedly. For every Quigg rally, Valdez answered. Spitting up giant wads of blood between rounds only steeled his resolve. He broke Quigg’s nose and battered him using superior technique, speed, and a brass set of balls. For every moment the announcers spent musing on the unfairness of the circumstance, they missed the point five times over. Oscar Valdez won because he’s the better fighter. Size had nothing to do with it.

Boxing is blacksmithing, not wizardry. Its skills are honed over years, pounded into muscle memory by constant repetition and adjustment. None of that can make you a fighter. You choose it with each punch. At any moment, you can quit, maintain, or accelerate. The very best find that extra gear, and they have to find it over and over again. Greatness doesn’t ask for permission or look for approval. It is achieved selfishly, because it is the desire of the person who must bear the pain. And they have decided that any pain is worth bearing to be who they have it within them to be. Oscar Valdez fought through a broken jaw, against an opponent who’d missed weight and had a seven pound advantage because he wanted victory, and nothing less than victory in its totality was good enough for him.