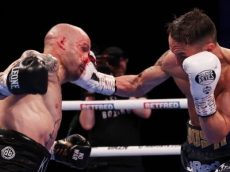 The line that separates a sanctioned prizefight from a carnival freak show is an embarrassingly thin one, and the only presence keeping those of us on both sides of it from being marks are the in-ring officials. These are men with names like Russell Mora, Laurence Cole and Ian John-Lewis, and it’s up to them […] 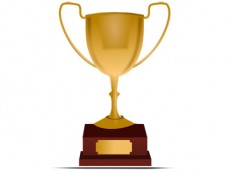 Welcome to The Queensberry Rules’ annual year-end boxing awards, continuing over the course of a week. Here’s how we do it around these parts: The major categories are Knockout of the Year, Fight of the Year and Fighter of the Year. For each category, we give five finalists, with video and/or relevant info, as well […] 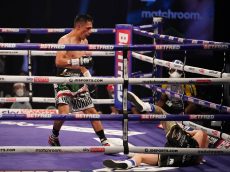 Had you heard of Mauricio Lara before he secured a fight with Josh Warrington? Probably not. But you surely know his name after Saturday afternoon. The 33-1 underdog erased the undefeated record of Warrington and he wasn’t remotely nice about it. He dropped him in the 4th and Warrington basically fought the remainder of the […] 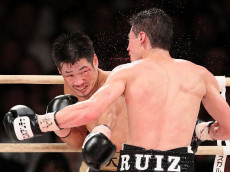 Every fight tells a story. The more complex the tale, the more interesting each round becomes, a new chapter that propels the riveting narrative. Sometimes, as with Hozumi Hasegawa vs Hugo Ruiz this fall, the story mirrors the hero’s entire career arc. And even more rarely, an individual round reflects that story in microcosm, like a […]

Welcome to The Queensberry Rules’ annual year-end boxing awards, continuing throughout this week. Here’s how we do it around these parts: The major categories are Knockout of the Year, Round of the Year, Fight of the Year and Fighter of the Year. The final leg, which will finish after, is a pu-pu platter of awards ranging […] 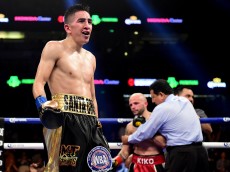 Featherweights Kiko Martinez and Leo Santa Cruz threw more than 1,000 punches in less than five rounds in Anaheim on Saturday. Unfortunately for Martinez, Santa Cruz’s were harder. From the beginning, Santa Cruz (32-0-1, 18 KO) looked enormous next to his diminutive Spanish opponent, who was fighting at the 126 pound limit for just the […] 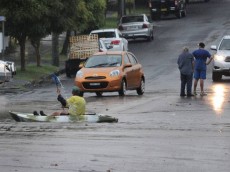 It’s boxing, so of course after weeks and week of virtually nothing on television, there are head-to-head cards on the two major premium cable networks this weekend. When it rains… Carl Frampton vs Scott Quigg, Saturday, Showtime Extreme, Manchester. This long-awaited match-up of British junior featherweight contenders is easily the fight of the week, and thankfully Showtime have picked […] 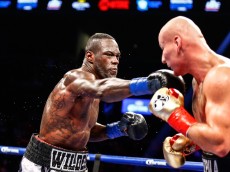 Deontay Wilder had his hands full briefly Saturday night on Showtime before those hands eventually found their target on Artur Szpilka’s noggin, ending in a spectacular one-shot knockout. The physically gifted heavyweight finally faced someone with a pulse after a series of no-hopers following his breakthrough early-2015 win over Bermane Stiverne, a win that hinted […] 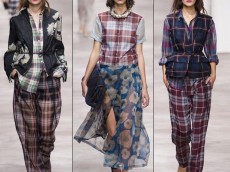 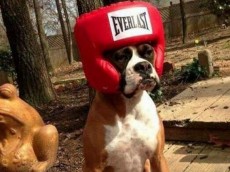 It’s a boxer. Geddit? I dunno, just trying to lighten the mood in a week without many competitive fights. Oh, there are fights — there are lots of fights. Just none of them are very hard to pick at all. Read on and we’ll give you the lowdown. Carl Frampton vs Alejandro Gonzalez, Jr., Saturday, […] 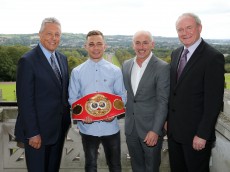 (Peter Robinson and deputy First Minister Martin McGuinness with Carl Frampton and Barry McGuigan at Parliament Buildings Monday; Kelvin Boyes/Press Eye) It is quite something when a fight crowd becomes a draw in itself. Sixteen thousand fans congregated in a Belfast shipyard on Saturday evening, there in support of Tiger’s Bay junior featherweight Carl Frampton, who joined compatriots Wayne […] 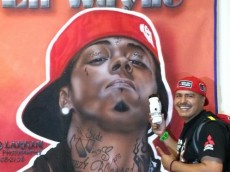 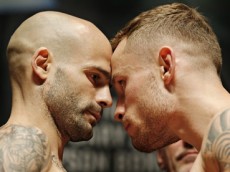 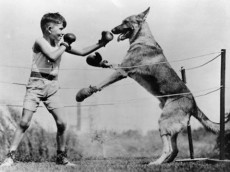 Old timey people were very much into animals boxing. There’s some appeal there, to be sure. (via) We’re heading toward the summer doldrums, which means not a lot of fights are being signed. A decent number are being discussed, though, and that’s good enough for Round And Round. Among the men discussed in this edition […]