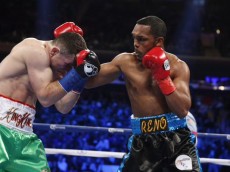 Tureano Johnson beat on Eamonn O’Kane so much Saturday night he set a middleweight record for beating on someone according to CompuBox, scoring a unanimous decision and landing 405 shots. Johnson connected on a whopping 58 percent of his power punches, and yet O’Kane made it to the final bell despite taking two knockdowns in […]