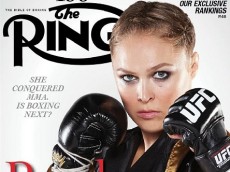 You know it’s a slow week in boxing when the biggest fight is a Charlo brothers mismatch and the biggest story involves Ronda Rousey. The latter involves her being on the cover of RING Magazine (pictured), and some fans aren’t that impressed since she’s not, you know, a boxer. “Is boxing next?” asks the magazine. […]