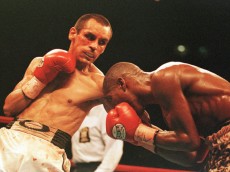 Returning home at around midnight last night, I switched on the earlier BoxNation card and gamely attempted to stave off sleep. It didn’t work. No sooner had I watched Chris Eubank, Jr. destroy another journeyman when I promptly dozed off. I awoke some two hours later, in the midst of Mike Perez’s entrance for his […]