Pu Pu part two! Sillier than part one. Remember: Add “of the year” to everything.

Best/Worst Excuse For Losing A Fight. There’s nothing more I like than a good excuse when a fighter comes up short. The more improbable, the better. I loved the excuse from Wilfredo Vazquez, Jr.’s camp that he was blinded by Jorge Arce’s hair gel. I loved laughing at the “cheating foot-stomper” excuse given by Manny Pacquiao’s fans when their guy nearly lost to Juan Manuel Marquez. The one that takes the cake is David Haye’s “I hurt my pinkie toe” excuse for the Wladimir Klitschko fight. Alas, ESPN scribe Dan Rafael has battered all the comedy out of that one with his constant, six-month long campaign of toe jokes, none of which were funny to start and still aren’t and won’t be even under “comedy torture theory.”

Least Consequential Weight Differential. Miguel Cotto really wanted a catchweight for his rematch with Antonio Margarito, despite having had a couple fights at 154 pounds already, and asked for 150. He settled for 153 pounds, or one pound less than the maximum. Cotto went on to beat Margarito. Hmmm, a connection? Maybe I screwed this one up. Maybe it’s the most consequential weight differential, if the winner isn’t…

Most Consequential Weight Differential. For a fight earlier this year, Steve Forbes weighed 147.14 pounds, .14 over the agreed-upon welterweight limit. That extra .14 cost him 20 percent of his purse. I guess they wouldn’t let him exfoliate in order to reach the limit; I’m pretty sure I have .14 pounds worth of dead skin cells on me right now.

Worst Song Involving A Boxer. Boxers love singing and/or having songs about themselves. There was that rap song about Floyd Mayweather. There was the big hit single of Manny Pacquiao singing “Sometimes When We Touch.” Ultimately, there are two finalists: Andre Ward’s creepy, chintzy Christian rap theme song, or Victor Ortiz’ club jam that he recorded called “Catwalk.” I’m going with Ward’s.

Biggest Fake. Don’t worry, though, Floyd fans. Mayweather is gonna win some awards this year. Mayweather pretends he’s a big gangsta who has a good side that gives to charity. In reality, neither are true. This year we learned that his favorite movie is “The Notebook” and that he listens to country music. We also learned that his charity gives out practically no money. Holden Caulfield wouldn’t be a fan of Floyd.

Worst Fashion Choice. Was it DeMarcus Corley’s denim suit? Nah, that was kind of awesome. Was it Sergio Martinez’ purple suit? Nah, that wasn’t awesome but it wasn’t without some element of pimposity. Was it Pacquiao’s “Bieber” hairdo? Nah, cuz at least it was inspired by Bruce Lee rather than the the teen pop idol. The winner is Rico Ramos’ lip ring, which he had to get cut out right before the opening bell of a fight this year. Bad fashion choice — if you’re a boxer, anyway. Martinez’ suit is the image we’ll go with, though. Pimp. 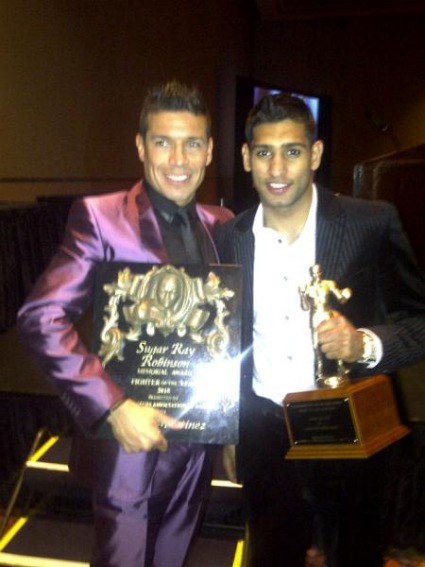 Best Evidence The Sanctioning Bodies Exist In A Moral Vacuum. Let’s just stick to the WBC. The unbelievably greedy institution had the nerve to open its convention this year with “We Are The World,” a song used to raise money for charity, and give its “Lifetime Achievement Award” to its own treasurer. Just this past week, the WBC showed even less awareness of right and wrong when its boss, Jose Suliaman, speaking of Mayweather’s jail sentence, proclaimed that violence against women was not a “major sin or crime.” He later declared that he misspoke because the remarks were in English rather than his native Spanish. Suuuure. In the same clarification, he also talked about how swell Mayweather was.

Top Boxer-Related (Alleged) Crime. Does this honor go to Mayweather? Obviously not; we all know, thanks to Sulaiman, that beating up women is not a “major sin or crime.” It could go to Matt Remillard, who went to jail for assaulting somebody with a baseball bat. It could go to Kevin Mitchell for running a mom-and-son pot operation, or to the Hatley brothers for trying to smuggle marijuana in boxing equipment. It could go to Kelly Pavlik, who keeps insisting he’s sober, even when he’s crashing his ATV or getting into fisticuffs with his brother. Ultimately, it goes to the allegation that junior middleweight Saul Alvarez beat up junior flyweight Ulises Solis. We get a lot of mismatches in boxing, but that might’ve taken the cake! Or whatever Mexicans eat for dessert.

Worst Business Decision. Oh God. This is not silly right now. It’s just depressing, these last several awards. So many bad business decisions this year. Putting Timothy Bradley-Devon Alexander in the Silverdome. Giving Bradley $1 million to fight a shot Joel Casamayor who would be impossible for him to look good against. Say, why’s Bradley at the center of two of these? He arguably deserves a third showing for turning down a career-high payday to fight Amir Khan. Time will tell on that one. Also, was it really worth it for HBO to give Serhiy Dzinziruk $850,000 for a fight AND a guaranteed return date? While Bradley and Dzinziruk were getting overpaid, Victor Ortiz was taking “short money” to a new level — “lilliputian money,” perhaps — by accepting $2 million to fight Mayweather in what might have been the year’s best-selling pay-per-view, when the “opponent” in the much smaller Cotto-Margarito II pay-per-view, Margarito, made $2.5 mil. Vanes Martirosyan, he turned down the big fight he’s been shouting about wanting, with Alfredo Angulo, and his subsequent complaints about not getting enough cash were contradicted by his manager, later his ex-manager because he was so disgusted with Martirosyan over it. And nobody thought it was a good idea for Bernard Hopkins-Chad Dawson to be on pay-per-view, but it was necessitated by another peculiar business decision to give Hopkins a three-fight contract on HBO. Amid all those gems of stupidity, none might top Union Boxing bidding $1.1 million to promote Vyacheslav Senchenko-Brad Solomon, when the next highest bid was just $200,00. Just because the fight fell through doesn’t un-bad the DECISION itself. I guess they’re kind of zany, all these bad decisions, but more entertaining to those who fancy gallows humor.

Quote. Let’s change the tone. There were some terrific quotes in 2011, although few of them involved trash talk, as in the past. Here’s Emmanuel Steward on HBO, being captivated by Ortiz-Andre Berto: “OH MAH GAWWD!!!!” Here’s Ann Wolfe, on James Kirkland’s string of soft opponents prior to fighting Angulo: “It’s truly like, ‘We want to kill something,’ and they want to give us meat that’s already dead. A real predator don’t want no cooked meat. You keep feeding a damn lion meat out of the refrigerator, it’s gonna lose its predatory instincts. We want something raw, with its eyeballs looking at us, so we can kill it and eat it.” Here’s Erik Morales, whose comeback had been seen as a sign of insanity: “I have seen a lot of comments on Facebook…people saying I am crazy, and I want to confirm that I am crazy.” (Ignore the second part of his quote that I excluded. It makes the whole thing less funny.) Here’s Breidis Prescott, commenting on Khan’s fight against Paul McCloskey: McCloskey, he said, was “mystery meat.” (Subsequently, Prescott fought… McCloskey.) But for sheer pith, here’s Cotto, who had alleged that Margarito used loaded handwraps against him in Margarito’s stoppage victory in 2007/8, responding to a question about whether he noticed any difference in the punches of Margarito in the rematch: “I’m still awake.”

Animal/Boxer Interaction. Kangaroos were on a spree this year of assaulting senior citizens. Pacquiao received a chicken sacrifice prior to his fight against Shane Mosley. Luis Concepcion got gored (in the BUTT — har har) by a bull. But Nicolay Valuev hunting for the Russian yeti while looking EXACTLY LIKE THE RUSSIAN YETI was classic. Who cares if the “animal” doesn’t exist, in this case? It’s silly, dammit, and we’re being silly now. There are no rules with this Pu Pu.

Corniest Fight Promo. I actually liked the card that was called “Octoberfist,” because there’s a time and place for boxing cards that sound like bad action movies. Plus, it took place in October, and it involved boxers, so… I don’t think I need to explain that one any further. I also liked “Believe It Or Not!” with the Ripley’s tie-in for Hopkins-Dawson. Too bad it became an obvious target for quips about the fight itself, a la “I can’t believe this fight is on pay-per-view!” Corniest of all was this video attached to the Mayweather-Ortiz “Star Power” fight. The commitment of whoever wrote that script to beat a metaphor to death, use voodoo to turn the metaphor into a zombie only to beat it about the head until it was no longer even undead… it’s breathtaking. I don’t know if I laughed at anything boxing-related harder in 2011.

Least Convincing Denial. In a year when boxers hired ex-steroid dealers left and right, Top Rank’s Bob Arum exclaimed: “The steroid problem is fading into the past.” Sadly, I fear it’s quite the opposite.

Best Reporting Mistake. Remember when Ross Greenburg was fired by HBO? No, not that time, the first time. Or when Joe Frazier died? No, not that time, the first time. Remember when NBC decided to air a boxing program? Oh, wait, it didn’t, because it was only Versus aka “NBC Sports” that would be airing it. Since that one still hasn’t been retracted, it wins the award.

Most Contentious Mayweather Interview. The Rude Jude interview with Mayweather was awfully contentious, but at least it didn’t end with the interviewer saying he wished he could beat up Mayweather, the way Larry Merchant’s did.

Worst In-Ring Injury. This one isn’t for the faint of heart, so it’s a little farther down the page. We had Pawel Wolak’s eye swelling so badly it looked like a giant vagina, Margarito’s eye swelling shut to such a degree that one of the doctors who tried to pry it open reportedly gasped, Morales fighting through his own swollen eye and Julio Cesar Chavez, Jr. losing a fight with ceiling fan and/or the battle of the bulge. Overlooked — and feel free to overlook the picture of it below — was Mike Alvarado’s ripped lip. Ewww.