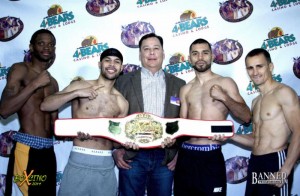 I love tournaments and the lightweight Boxcino tournament is why I love them. Five weeks ago, we were treated to an excellent opening round, and the semifinals from the Four Bears Casino in Newtown, N. Dakota Friday on ESPN2 were even better.

The opening bout between Miguel Gonzalez and Fernando Carcamo produced the most gif-worthy punch of this year. Gonzalez (23-4, 16 KO) walked straight to the center of the ring and snapped Carcamo’s head back with a beautiful lead left and appeared like he might be too quick. That didn’t last long, though; one minute into the action Gonzalez pulled straight back with his hands down and Carcamo (17-5, 13 KO) landed a huge left hook that splayed Gonzalez across the top rope. How Gonzalez head didn’t wind up in the third row is a miracle — he flopped like a fish out of water. The ref rightly ruled it a knockdown and gave Gonzalez a count, but it appeared as if he was waiving the fight off and a jubilant Carcamo sprinted across the ring and jumped on the ropes in the corner. The action resumed, though, and Gonzalez seemed to have his bearings about him by the end of the round.

Gonzalez became the aggressor in the 2nd round and managed to keep Carcamo on the ropes for long stretches during the 2nd and 3rd rounds. There was a great deal of grappling but not much clean punching. Gonzalez was using a variety of veteran tactics (fouling) in close, particularly holding Carcamo’s head down with his right hand while throwing left uppercuts. The punches that were telling were Carcamo’s body punches that he whipped with both hands. As the fight reached the later rounds, it was clear that Carcamo was in control. Even when his back was to the ropes he was out working Gonzalez, who appeared flat. ESPN’s Teddy Atlas noted that this could be due to the short turn around from the first round of fights. It wasn’t until the final round that Gonzalez showed any sense of urgency, and I wondered where that spear of a jab hand been hiding the first seven rounds.  It was too little too late in this fight, though. The judges returned a majority decision in favor of Carcamo by scores of 77-75, 78-74, and a bizarre 76-76 draw. TQBR scored it 77-74 for Carcamo.

The second bout didn’t need any judges. Pre-tournament favorite Petr Petrov brutalized Chris Rudd on his way to a 4th round TKO. These two are clearly in different classes. Much of that boils down to experience. Petrov (34-4-2, 16 KO) was celebrating his 31st birthday by competing in his 40th professional fight. Rudd (13-2, 8 KO) on the other hand owns a grand total of two wins over opponents with winning records. TQBR deputy editor Alex McClintock predicted this, saying “Petrov is much more skilled than Yakubu Amidu, Rudd’s previous opponent. He’s going to pick off Rudd all night, putting hard punches between his spaghetti-armed shots.” That is exactly what happened. Petrov landed a sneaky left hook just seconds into the fight, and it seemed like he couldn’t miss. Rudd bravely traded but his arm punches weren’t enough to keep Petrov at bay. Halfway through the 3rd round Petrov stunned Rudd badly with a left right combination and didn’t let up. Rudd was visibly staggered several times and refused to clinch. Everything Petrov landed was heavy and I couldn’t believe Rudd was still standing. The 4th was a continuation of the 3rd. Petrov came out fast and hurt Rudd immediately before trapping him in a corner and pouring it on. Rudd still didn’t clinch, throwing back but never hurting Petrov. With Rudd nearly out on his feet and Petrov not letting up, the Ref stepped in to save Rudd from any more punishment. I have no clue how Rudd stayed on his feet.

That leaves us with an action fight for the tournament final. Petrov versus Carcamo features two fighters who believe in their power and have vicious body attacks. I can’t wait. My early thought is that Petrov’s technique is enough better than Carcamo’s to keep him from taking too many huge punches while trying to get close enough to land his own.

At the end of the fight, studio host Doug Kezirian reported that the Magomed Abdusalamov family is filing suit against the New York State Athletic Commission and doctors involved in the Mike Perez fight that left Abdusalamov in a prolonged coma.

Rabies Watch: Three minutes into the show Teddy was frothing like Cujo while attempting to bend his NCAA tournament metaphor. He was also able to go on a self righteous, if accurate, rant about the judge who scored Carcamo-Gonzalez a draw. While not exactly rabies-y, when Kezirian called him “legendary” Teddy insisted they must have Todd for all fights, just like you must have lime in the coconut. Sweet breakdancing Jesus what an odd man.