So continues our marathon coverage of one of the biggest bouts of 2014, Timothy Bradley vs. Manny Pacquiao II, on April 12 on HBO Pay-Per-View. Previously: a primer on the rematch; a Bradley-Pacquiao edition of TQBR Radio; keys to the fight; the undercard, previewed; a staff roundtable. Next: the Ultimate Guide.

To the devoted boxing fan base, Timothy Bradley vs. Manny Pacquiao II this Saturday speaks for itself. It is a match-up of two of the top five or ten best fighters in the sport, a rematch of a bout with a controversial outcome, a slightly faded superstar against a man trying to become a full-fledged one, close to a 50-50 affair, the best and biggest fight we’ve gotten so far in 2014.

Yet maybe it’s not popping as much as Top Rank’s Bob Arum would like it to, judging by his broadside against MGM Grand, Showtime, Floyd Mayweather and others this week. His gripes are, for the most part, valid: Hey, MGM Grand, there’s a blockbuster fight happening in your casino this weekend, maybe you should have more posters up for it than the one next month…? But the diatribe feels like Arum trying to stir up some headlines for a bout that might not be connecting with the general public. 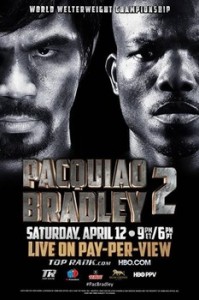 When it comes to boxing’s casual and hardcore fan bases, both cores can be too myopic. But if it is true that the casual fan isn’t biting on Bradley-Pacquiao II, now is the time for them to wise up. Perhaps there’s a bitter taste in their collective mouths from the all-time bad judging that gave Bradley a win in the original welterweight meeting. Perhaps Bradley remains too obscure or otherwise bland somehow, despite fighting Pacquiao in 2012 and following it up in 2013 with a Fighter of the Year campaign. Perhaps the well-known lackluster quality of the undercard is driving even the hardcores away when contemplating the price tag of being a fan this spring and summer, purchasing so many pay-per-views.

But make no mistake: Bradley-Pacquiao II is a very, very daunting contest for both men. And the reason why comes down to this: Since last they met, Bradley has gotten better and Pacquiao has gotten worse. That bunk decision for Bradley? It could very well become an authentic one for Bradley this weekend.

There are two big hitches for Bradley’s chances, as I see it: A. Pacquiao might have been violently knocked out since he last fought Bradley and is two years older than that night, but he also fought like he was going through the motions and could have won more definitively if he had tried; and B. The judges. Team Bradley knows about the second hitch. He will have to win rounds conclusively, something that can be difficult if he uses the best plan for beating Pacquiao — counterpunching.

A. is a bit easier to resolve, because Bradley, too, wasn’t at his best in the first encounter, owing to leg injuries. If you figure both men could be better than last time they fought, but Bradley is the one who has grown and Pacquiao is the one who has receded, even if only slightly, then this hitch isn’t so troublesome.

Really, it shouldn’t have been possible for anyone to score Bradley-Pacquiao I as anything more than 8-4 in rounds for Pacquiao, because he landed the better punches and there weren’t many rounds that were close. But it wasn’t a totally uncompetitive fight. Bradley caught Pacquiao with counter lefts, straight rights, jabs upstairs and downstairs and clubbing counter rights. He worked in clinches, and Pacquiao didn’t. And late in the bout he was fighting a version of the fight he should’ve from the beginning, not trading so much and sometimes outworking the coasting Pacquiao.

When Pacquiao attacked and kept his work rate high, throwing those hell storm combos that got him to this level, Bradley wasn’t able to do much about it. Pacquiao landed his trademark straight left plenty, too, and some right hooks. He might have hurt Bradley once or twice, but never badly. Thing is, these days he seems content for the most part to just make contact. It’s hard contact because it’s Pacquiao doing it, but it’s not meant to knock anyone out, with the exception of the last Marquez meeting. And trying for the KO like that opened him up to the knockout he suffered.

Bradley, though, can’t punch like Marquez. He barely hits hard enough to keep anyone honest. That means that Pacquiao could probably go for the kill without fear of Marquez-level repercussions. Bradley’s team wants this, because they think it gives them countering opportunities, but I think an angry, knockout-oriented Pacquiao is the one that has the best chance of winning. In other words, I don’t think Bradley SHOULD want this. And I don’t think it’s who Pacquiao is anymore, anyway.

As I opined in the staff roundtable, the best option for Bradley is indeed to move and counter, but to work in the occasional attack to deal with the problem of the judges not favoring the aggressor. Yet, for three fights, Marquez countered Pacquiao well and never got a decision (I think he deserved two, and most think he deserved at least one if not all three). Perhaps as a younger, nimbler fighter than Marquez, Bradley can do enough work to overcome that inherent judges’ bias.

When this rematch was signed, I liked Bradley to win. In the interim, Pacquiao got blasted by Marquez and won somewhat impressively against Brandon Rios, while Bradley won a slugfest with Ruslan Provodnikov and outboxed Marquez. What Bradley did was truly impressive. But I still see match-up problems for Bradley that aren’t going to go away. Pacquiao isn’t so faded that he won’t still be quicker and more powerful. And, again, the judges: Basically, if Pacquiao is aggressive, he wins.

I think he’ll be sufficiently aggressive to convince the judges, if not the fans. Bradley might deserve the win in a bout sprinkled with firefights more than wire-to-wire action. But Pacquiao will walk away the decision victor.